How to fail at parenting

Step one: take your child with asperger's to Sports Authority to look for a bike even though he hasn't napped.

Step two: Don't put him in a cart and try to let him walk around the store.

Step four: loose grip of the boy and see him to flying into the goal post of a basketball goal!

Yeah when he first hit I just thought it was another knot on the head and that we would work on this yet again and explain to him that he can't go running off.

Well once I picked him up I saw the blood bubbling out of his head. Ok no big deal still. Sure he's screaming but I would expect it. He just took a header into the basketball goal!

I get him up to the front counter and with the help of the associates get some paper towels on it. During all of this the sweetest off duty EMT came over (that ironically reminded me a lot of my bother in law) and introduced himself and asked to look him over. After a quick look over and me explaining that he doesn't communicate things well said he looked fine and more than likely didn't need any stitches. I thanked him for his help and got him to the car.
The funniest part of this was as I was carrying him out of the store he was more upset about not getting to look for a bike!

Then we headed down the road to Jack in the Box for a milkshake. Because with a scare like that I think it was warranted. Even with all the screaming he calmed down quickly.


After we got home and got him cleaned up he protested the bandaid, but after given the ds and the cooking game quickly forgot it was there.


He acted normally all night so no need for concern.I changed his bandaid to a sponge bob one but soon saw he was bleeding through it since he was still up and moving and not letting it really clot. 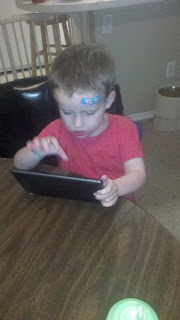 By the end of the night I made him wear a bigger piece of gauze taped down to help with any bleeding over night.

The bad thing is after all of this all I could do was laugh at it.I was really embarrassed that it happened in the store, but after he was so upset by not getting to look at bikes and not about his head and both of us being covered in blood, how could part of me not just laugh!
Posted by V at 8:50 PM