Alvin has loved watching The Big Bang Theory for quite a while now. He especially loves the character Sheldon (who many believe to have Asperger's Syndrome but it is never stated that he does).  Alvin loves when he says "Bazinga!" and dances to the opening and closing music every time.

This week I found out that Alvin and the character Sheldon are similar in another way. They both love thier whiteboards and are not happy when you mess with them. Here Sheldon shows Penny his neighbor what is on his whiteboard. Notice how proud he is of what he has on it.


Well this week since we were stuck inside due to the snow I decided to set up the easel the kids got for Christmas that has a magnetic whiteboard on one side and chalk baord on the other. It also came with some magnetic numbers and letters which of course made Alvin VERY happy. 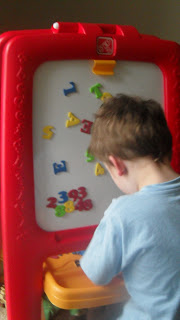 As soon as I got out the numbers Alvin would not let Elliot anywhere near them. He then told me "5 +4 equals 9".  This was shocking but we got a kick out of it and the rest of the night he happily worked on adding different numbers together. He didn't always get them right but seemed to have fun learning them. 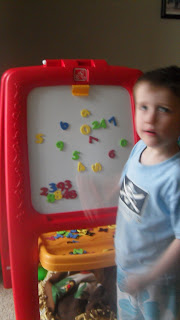 Then his sister decided she wanted to play too and that wasn't the best idea! He kept saying don't mess with my board!! While we are working on teaching them both to share we couldn't help but laugh. He was so upset at her messing with his number patterns and math that it was just funny.

During all this all I could think of is the character Sheldon. Alvin certainly has his days as a 4 year old boy and his love of math and numbers that I just can't help but think of Sheldon. When he was 2 we used to joke that his love of numbers had him destined to go into engineering or science. He may or may not but right now we are having fun with his slightly odd obsession to numbers and math just like the character he loves.
Posted by V at 7:50 PM