Being an engineer I am fascinated by working through problems and finding out what is really causing them. After Alvin’s second set of MRI’s I requested a copy for personal use and was pleased that the hospital sent them to us pretty quickly and I immediately started looking at his head and putting the pictures together with everything that we had been told.

Alvin has obstructive hydrocephalus which is just what it sounds like. There is an obstruction (in his case a cyst) that is blocking the flow of spinal fluid. In his case the cyst is blocking about 80% of the space between his 3rd and 4th ventricle.

This cyst from what we are told could have been there since birth but no one really knows for sure. His head circumference was always on the high side but nothing that was out of the ordinary so his pediatrician never even questioned it. He was a little late walking and crawling but nothing that raised any red flags to anyone.

So after 5 years (or so) of the cyst growing this was one of the first images that the surgeon saw of his left and right ventricles.


Those large V shaped areas, yeah they shouldn’t be there. His ventricles were quite enlarged and this was why the neurosurgeon’s office got us in quickly. Looking at this picture we know 2 things, he definitely has hydrocephalus and the pressure in his brain is probably elevated. To what extent we didn’t know at the time.

As I have talked about in the past the solution we went with was an endoscopic third ventriculostomy or ETV procedure. This is a surgical option that unfortunately isn’t an option for all kids/adults with hydrocephalus. The surgeon not only has to be skilled in the procedure, but also the patient has to have the right anatomy. Also this procedure is typically the most successful in patients with obstructive hydrocephalus like him.

So after 3 months and a revision to his head due to the infection these are the results.
The arrow is pointing to a tiny hole that was made during the procedure to allow for spinal fluid to drain and relieving some of the pressure in his brain. The white line that trails down from it is proof that his spinal fluid is draining like the surgeon had planned.


The last thing we looked at was his overall change in ventricle size. 3 months after the initial operation the ventricles in his brain are starting to shrink. There is no guarantee that they will ever go back to a normal size, but the hope is over the next year they will continue to shrink little by little. We also know that what will be considered full recovery will take a year.

Another thing to note is due to the placement of the cyst our surgeon told us again that it is not in the plans at this point to remove it. The cyst is in a place very hard to get to and as long as it doesn’t get any bigger or change it will not be touched. The ETV allows for it to stay there while still allowing spinal fluid to drain back into his circulatory system.

So now in the mean time we go back to being as normal as possible. Granted some days that’s harder than others. I am beyond paranoid with him. Every time he acts sleepy at a time he normally isn’t, every time it looks like he is getting a headache my mind starts racing.  He always seems to come out of these and my worrying is for nothing. Until he completely learns to tell us when something is off or hurting then both W and I will continue to be paranoid.

He is at least back in gymnastics and will be starting a full day kindergarten program in the fall. Going back to the gym is a big deal for him and he is starting to pick up right where he left off. He is still the same goofy kid that speaks in lines from his favorite shows and is socially awkward, but its getting there. He is answering questions appropriately in class though which is a step forward. 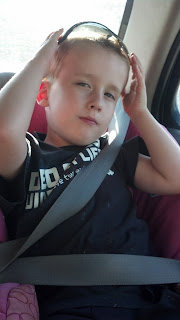 At home he’s starting to engage in more imaginary play by building what he calls “American Ninja Warrior” courses out of Lego duplo blocks. He is even starting to get better fine motor skills with writing practice. This past week when we were going to practice he sat down and wrote his name with no help. Its still really rough, but at least he did it and I could tell what he was writing.

So that’s about all. I hope this post sheds some light on exactly what his condition looks like via MRI. To me its pretty interesting and while its been a scary and trying time over the last few months we are now in the management and recovery phase which we are very happy about. If anyone has questions please let me know and I will do my best to answer them.