We started this whole journey about this time last year. My sister recommended we get Alvin seen by a speech therapist at Elliot's first birthday party. From the time we first heard the word Austim from the speech pathologist we were sent on quite the spiral. Of course the speech therapist couldn't officially say what she thought was going on with him so we were referred to an occupational therapist and psychologist as well as back to his pediatrician for a full evaluation. The next month was spent with me running all over the place taking him to each appointment and hearing the news. Asperger's syndrome combined with an atonic seizure disorder. Fun stuff. After looking at all our options for the seizure issue our pediatrician recommended no medication because he will probably grow out of them and recommended for speech and occupational therapy.

A year later and he has come so far and W and I have learned to deal with it all better.
Compared to a year ago:
1. He makes better eye contact. He is learning slowly that making eye contact and talking to someone isn't a bad thing. His eye contact with his gymnastics teachers and music teacher is so much better than it used to be and the constant positive reinforcement every time we see them seems to be paying off.

2. He is learning to speak so much better! Now most days we can get 4 to 5 word sentences or phrases with little to no prompting. He is much better at telling us what he wants and needs and can better tell us when something is wrong or if he likes or doesn't like something.

3. We finally have night time accidents to a minimum! Its no longer an every night thing and he no longer needs to wear pull ups at night or for nap time.

4. Motor skills improvement. Alvin is no where near as clumsy as he used to be. Don't get me wrong he still trips over his own feet and has the standard 4 year old accidents but its no where near as bad as a year ago. He can now walk up stairs alternating feet and is beginning to more actively participate in gym games without as much frustration or wandering off because he's board and just can't get it.

After a year we still struggle with these things too.
1. Social- playing appropriately with other kids his age and his sister. Some of its the normal stuff about taking turns with toys and other preschool stuff. Other things are more like answering other kids when they ask his name.

2. Public meltdowns- Oh yes we still have tons of these. Depending on the day he could have a complete and utter meltdown in Safeway or Target or any other store. We still get the constant looks about why he is acting that way. I'm getting used to the looks and tend to just ignore them all. He is getting better but still has a lot of work to do.

3. Tantrums at home- with better communication comes more tantrums. He thinks now that just because he asks for something that he will get it. When he doesn't he can erupt and the meltdown can last hours. Its something that we jus work on little by little and try to teach him that just because he doesn't get what he asked for its still ok.The best way to think about it is like him being about 2.5 or so.


All in all the past year he has improved in leaps and bounds. At this point with the combination of developmental preschool, gymnastics and music therapy I think we are on the right track to helping him. 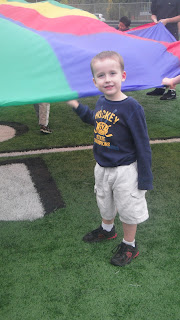