April is Autism awareness month and yet for me this week all I can think about hydrocephalus.

One year ago this week we met with a neurologist who showed us Alvin's MRI scan and told us about the cyst in his brain. He said not to worry but we would be referred to a neurosurgeon to see if surgery was needed on the cyst or not.

Two days later we got the call from neurosurgery at Seattle Children's Hospital neurosurgery department saying that he actually had hydrocephalus and that he would probably need surgery the next day.

I remember distinctly the day we heard the words hydrocephalus. The rest of the day and night W and I spent hours  researching on line what the treatment options were and trying to get in our heads what was going on.

On 4/20/12 we met with his surgeon Dr. Lee and started on this journey. She went through the options with us and suggested an ETV (endoscopic third ventriculostomy) instead of a shunt to treat his hydrocephalus. She said he may need a shunt later in life, but with a high failure rate, if we could do the ETV and it work we would have a better overall outcome for him. The news of the surgery followed a flurry of activity of an eye exam to be sure his optic nerve wasn't compressed then signing forms and prepping for surgery. 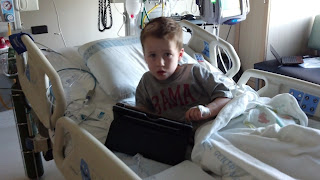 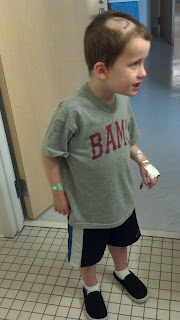 On 4/20/13 Alvin will play in his first tee ball game. While some parents will be there and hoping that their kids make a good play or hit the ball into the outfield, our thoughts will be in a different place. We won't be concerned with the things that other parents are worried about. Instead the thoughts of how far he has come in a year will be more on our minds. 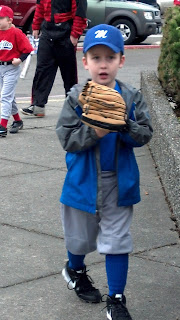 One year ago he was having major surgery to alleviate the pressure in his brain. One year ago he was in the ICU and our world had just been turned upsidedown. The last year hasn't been easy. With a site infection and numerous scares from his inability to communicate have kept us on our toes. Both W and I are constantly on the lookout for the signs that things are going wrong.

Now one year later he is playing a game he loves with normal kids. He amazes me all the time at how far he has come in the past year, but right now it hits the hardest. 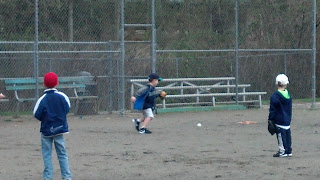