Alvin's first t-ball season is officially now over and its such a relief.

Over all I would consider the season a success for him. It started out in April which in Washington means the cold weather is still hanging around and the first few practices were quite cold. Alvin was normally the only kid in shorts (because we couldn't manage to get him to wear anything else!) and never complained about the cold.
Alvin started off as awkward as ever. He was in a group of kids he didn't know and tended to not try to engage them. During warm ups instead of throwing the ball with other kids he preferred to go out to the outfield and pretend to pitch like a pro.

The first few rounds of batting were also rough. The combination of hydrocephalus and autism make hand eye coordination really tough, so swinging a bat to hit a small ball was quite a challenge. There was one practice that I remember specifically that he missed the ball 6 or 7 times. The kids on the team started talking and snickering a little but he was determined as ever to do it.

Overtime he gradually started catching on. He started to throw, not like a major league pitcher every time but more like a normal player. When he couldn't figure out how to stop a ground ball with his glove he made up his own way with his foot.

Batting though was always fun for him during games. Every single time he walked up to the plate and did a routine to get ready just like the pros. The funny thing is when he did it all the way through he was more able to hit the ball. When the coaches stopped him from doing it then he had issues making contact. 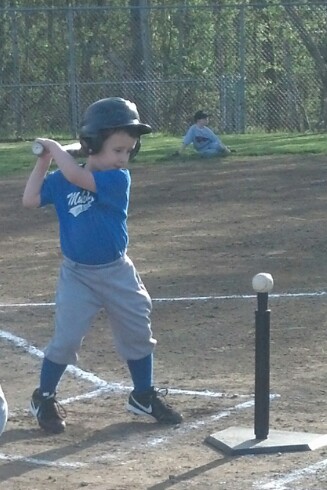 The highlight of the season though was the last game. As I said due to the combination of hydro and autism hand eye coordination is rough. Well the kids had been working on hitting coach pitch balls for a couple of weeks and Alvin hadn't had much success. The last game of the season Alvin did the unexpected. On his second pitch from his coach he acts like he is going to bunt then hits it! The coach was shocked and all the kids were cheering. The next at bat the same thing happened and he was able to make contact and run to first base again. The coach later told me that once the other kids saw Alvin hit the ball every single one got a hit when they went up.